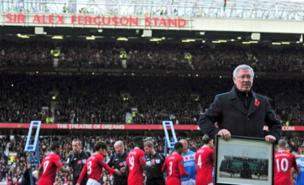 Danny Welbeck’s deflected header was enough for United to claim all three points against Sunderland but the day belonged to Sir Alex Ferguson.

Old Trafford welcomed Fergie in style today, with a new banner unfolded on the Stretford End listing all the trophies won in the 25 years and the crowd belting out a loud “Every single one of us loves Alex Ferguson”.

Fergie has seen a lot of football in his years at Old Trafford, but rarely it would have been as dull an affair as the first 45 minutes today.

With Rooney again deployed in midfield alongside Fletcher,Park and Nani, United failed to create any decent opportunity until Phil Jones volleyed over the bar just before halftime. Sunderland, on the other hand, didn’t cause Lindegaard any problems either.

United broke the deadlock just before halftime when Wes Brown turned Nani’s corner into his own net after Welbeck had failed to direct the ball towards the goal. It was, perhaps, fitting that a former United player had given them the lead.

United looked to push on after the break, with Nani finding a bit more space on the wing and Rooney spraying the ball around nicely.

Nani was at his frustrating best tonight, alternating good touches with sloppy and lazy ones. It’s interesting how, on a few occasions, he stood still waiting for the ball instead of bombing down the wing. Movement without the ball is crucial particularly when playing against a side like Sunderland that looked happy to sit back and soak the pressure.

Hernandez saw his header cleared of the line by Richardson after 62 minutes, then Rooney and Evra forced two great saves from Westwood.

Sunderland had a penalty appeal turned down when the ref consulted the linesman after Ji Dong-Won had gone down after a challenge from Jones and Ferdinand, but waved play on.

Bendtner should have scored with 10 minutes left, but failed to get on the end of a brilliant cross from Larsson.

United got their win and another clean sheet, the fourth in the last four games, again without showing glimpses of the wonderful football played earlier this season.

United fans could be forgiven for forgetting the performance, on a day when English football paid tribute to the greatest manager of all times.

Stand up if you love Fergie.