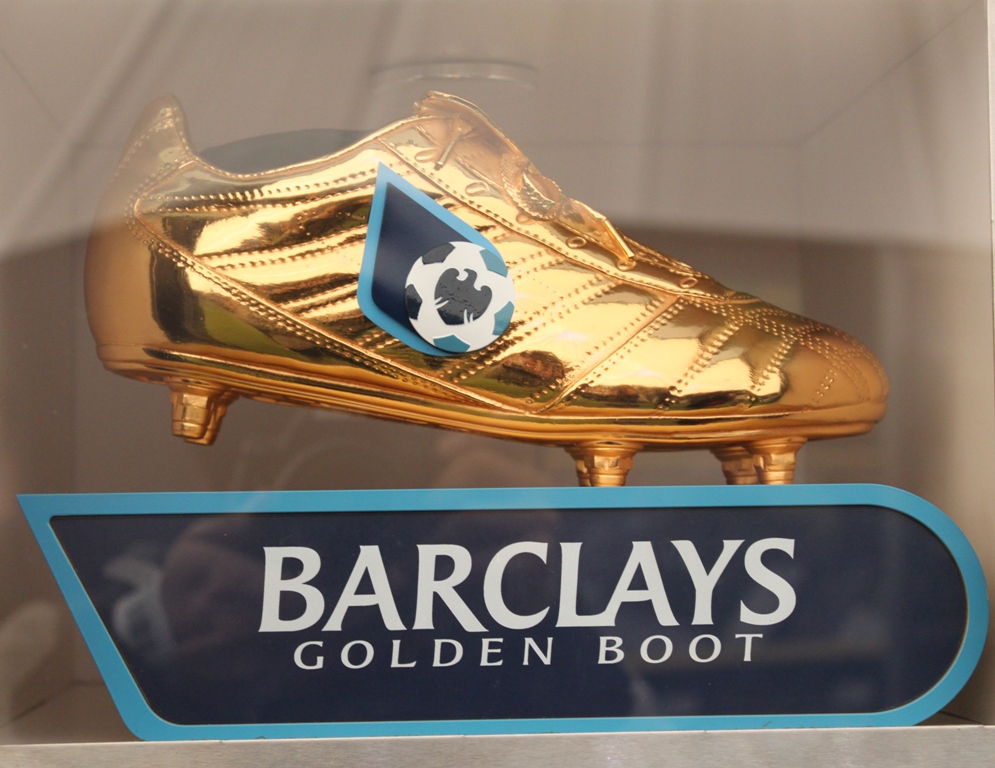 With 4 games of the Premier League season remaining, the race for honours is surging towards a thrilling crescendo, but for 3 individuals there’s a race for an accolade of their own taking place that could easily go down to the final minutes of the season.

Robin van Persie, Wayne Rooney and Sergio Aguero are within 6 goals of each other and each will have their eye on the Golden Boot believing their respective teams have fixtures to put them in with a realistic chance of catching, or distancing themselves, from their more than capable counterparts. The race is on, and there’s money to be made in the football betting ring!

The obvious (and possibly sensible) money is already layed down on Arsenal’s Robin van Persie. With 27 goals chalked up for the season so far, van Persie sits a hat-trick ahead of Manchester United’s Wayne Rooney but will no doubt feel that he’ll need at least one more goal to make his advantage an unassailable one. Currently available to back @ 1.2 (1/5) the market suggests punters expect him to find that goal and more and go on to take the award. But is his form worthy of such confidence?

van Persie’s had a tremendous season (thanks in no small part to the fact he’s finally spent a full season almost injury free), but since he buried Liverpool in injury time on the 3rd of March at Anfield, he’s found the net just twice despite Arsenal’s decent run of form during that time.

Rooney on the other hand enters the final stage of the season in tremendous form; scoring goals at will he’s the chief danger to van Persie’s possible crown. Since the weekend of van Persie’s Anfield heroics Rooney has netted 7 times including twice in United’s latest triumph over Aston Villa to cut the gap between the two strikers from 8 goals to just 3 in a mere 7 games. Maybe it’s that statistic that has punters pushing Rooney’s price to a slightly skinnier than expected 4.5 (7/2).

But hold on a minute, before you rush off to back Rooney to catch and surpass van Persie in the hope his form continues and van Persie’s goals have dried up; in the games van Persie has played this season against the four teams Arsenal have left to face, he’s scored 3 v Chelsea, 2 each v Stoke and WBA and 1 v Norwich, great stats when you consider 2 goals will probably seal the deal. In stark contrast, Rooney backers may want to look away now! In the four previous games against the remaining opposition he faces this season Rooney has failed to find the net once; with Everton, Man City, Swansea and Sunderland all finding a way to shut him out.

Those stats suggest it’s Rooney’s price  – and not van Persie’s – that’s a little on the skinny side.

It promises to be a fascinating battle between the pair, but let’s not forget about Manchester City’s Sergio Aguero quietly but dangerously looming in the background. The Argentine has returned from injury and instantly hit top gear scoring 2 goals in each of City’s last two fixtures.

Remember, unlike Arsenal (who have 3rd spot all-but tied up), City are still pushing Manchester United for the league title and have everything to play for. Their last two victories have seen City make an impressive return to form scoring 11 goals and putting daylight between themselves and United in the goal difference column. Aguero will be keeping his fingers crossed van Persie continues to struggle and United’s opponents repeat their feat of shutting Rooney out. He’ll also need a huge effort of his own to redress the balance, he needs to score at a ratio 3:1 p/game compared to his rivals at least to stand any chance of becoming the Premier League’s top marksmen in his first season here, his odds of 26 (25/1) reflect this.

However, the current odds by bwin.com – and the entire market – could easily be blown wide open after this weekends fixtures, especially Aguero’s price; City take on almost-relegated Wolves (who have conceded an alarming 2.75 goals p/game in their last 8 games), if they capitulate, Aguero could have a field day while Rooney and van Persie face tougher opponents in Euro chasing Everton and a resurgent wounded Chelsea respectively.