Valencia and Young but it’s the same old United 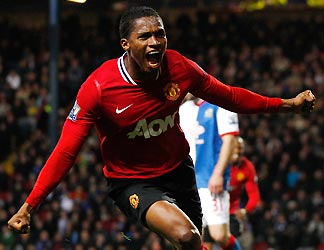 Late goals from Antonio Valencia and Ashley Young fired Manchester United to a 2-0 win at Ewood Park, opening a 5-point gap at the top of the table.

Blackburn had held United at bay for 80 minutes when Antonio Valencia struck a ferocious right footed strike into the far corner of Paul Robinson’s goal, sending the United fans that had packed the Darwen end berserk.

It was a moment reminiscent of Steve Bruce’s header against Sheffield Wednesday 19 years ago – a moment that could decide the outcome of the title race.

Despite being frustrated for long spells of the game United kept prodding along, like a batsman settling for singles while waiting for the big shots.

And when the big shots did arrive, it was a familiar tale of stubborn and utter belief being rewarded for a team, a manager and – tonight – 7000 odd fans that simply refuse to give up their quest for yet more glory.

Following City’s slip up at home on Saturday, United were keen to seize the opportunity of opening a significant gap at the top of the table while delivering a potentially devastating blow to their neighbours.

Blackburn had caused a shock back on new year’s eve as they outmuscled United at Old Trafford, winning 3-2.

Ferguson chose Jones alongside Carrick and Scholes in midfield to match Blackburn’s physicality, with Rooney and Valencia out wide and an unchanged back five, with Rafael, Evra, Ferdinand and Evans protecting DeGea.

United started with purpose, Hernandez forcing an excellent save from Robinson, but were unable to make the most of the possession.

Blackburn stuck to their strengths, trying to cause United troubles on the break through Yakubu and Hoilett.

That both times they were denied by David DeGea – the man heavily criticised when the two sides met early in the season – went some way to illustrate United slow but relentless progress this year.

First the Spaniard produced a stunning save from a Martin Olsson’s volley.
Then, on the following corner, he tipped Grant Hanley’s header over the bar to preserve United unbeaten record when playing on a Monday night – 8 wins out of 8 and 0 goals conceded.

United started the second half with verve – Rooney forcing a good save from Robinson from a freekick before Rafael called the Blackburn stopper into action again – but were made to wait for a goal.

After DeGea had parried a Pedersen’s freekick, Blackburn had a goal ruled out when Pedersen drilled the ball into the bottom corner, as the ball had crossed the byline before N’Zonzi’s cross.

Ferguson replaced Hernandez with Welbeck, Jones with Giggs in a bid to unlock Rovers’defence.

Ferdinand’s last ditch tackle on Yakubu prevented the home side from going ahead and United kept piling on the pressure, supported by their magnificent fans who didn’t stop chanting and encouraging their team for a minute, despite the deadlock lasting well into the last third of the game.

What a difference from those fans that left the Etihad on Saturday with City 3-1 down. In United’s case, the fans as well the players that have been in this situation before, and did not panic.

With Blackburn sitting increasingly deep, it was a case of when rather than if United would get a goal.

The answer was provided by Antonio Valencia nine minutes from time, as he received a pass on the right, cut in and unleashed a vicious shot that swerved past Robinson into the back of the net.

United had the game wrapped four minutes later when the immense Valencia – baffling how he can still be considered a normal player when, in reality, he’s probably one of the top two wingers in the world – found Young whose effort ended up in the net to spark yet more pandemonium in the Darwen end.

Five points clear with seven games left and with three of the next four at home is a fantastic position to be in, particularly for a team that has won the last seven games and won 10 out of the last 11.

In a few years, Antonio Valencia and Steve Bruce might be mentioned in the same sentence.